The Impact of E-waste 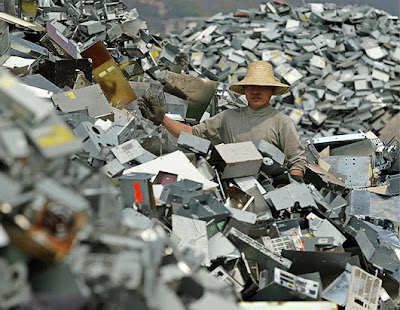 Humans have always been proficient producers of trash; however, towards the end of the 20th century we have created a new, noxious clutter: the electronic detritus that has come to be known as E-waste. Today, developed and developing countries alike are hooked on high-tech gadgets: TVs, computers, cell phones, video games, iPods, etc. According to a 2005 report from the U.S. Environmental Protection Agency it is estimated that Americans will discard 30 to 40 million computers each year. (http://www.epa.gov) It is projected that 25 million televisions will be taken out of service annually as viewers switchover from analog to digital televisions. To add to this, American consumers discard 98 million cell phones every year, and the number is growing. (BAN, 2002)

What is Electronic Waste?

Electronic waste, E-Waste, or high-tech trash denotes the electronic items that are no longer in use by consumers, and therefore disposed of as garbage. However, unlike typical garbage, much of E-Waste is not biodegradable, nor does typical waste pose large-scale health and economic threats. When consumers upgrade to new and improved technologies, the discarded technologies become E-Waste when they are not properly recycled, and we still have yet to come up with a truly efficient recycling system for the environment. It seems like a case where the technology advanced quicker than the realization of its implications.

Where did this begin?

The term electronic waste is only a recent entity, as devices of higher technology only began to be produced towards the latter half of the 20th century. Before the 1970s, there was little production of these technologically complicated items, each consisting of over 1,000 different substances, several of which are toxic and create serious pollution upon disposal. (BAN, 2002) Each year, more new devices are created, and more new devices are thrown out. This began in the most developed nations such as the United States and Japan, leading the technological revolution but also leading the electronic pollution revolution as well. And with an immense population, America remains one of the biggest locations where electronic waste originates from.

How is the E-Waste recycled once it is shipped to recycling centers in the developing world?

In the US, over 80 percent of discarded e-waste ends up in landfills. The remaining 20 percent is channeled through recycling companies. A handful of these recycling companies do indeed recycle the millions of TVs, computers, printers, cell phones, VCRs, DVD players, and iPods with minimal environmental impacts and health consequences for their workers. However, in the US and Europe recycling a computer costs approximately $20, but in India, for example, it can cost just $2. Most recycling companies ship waste to the developing world where environmental and health code enforcement is weak, and the waste can be processed much more cheaply, but at a higher cost to the environment and the workers.

Workers burn circuit boards to strip off computer chips and transistors, inhaling lead, mercury and cadmium, which burns their eyes. They burn microchips to recover copper. They dip circuit boards and electric cables into large tubs of acid in order to extract gold. The acid is a mixture of pure nitric acid and hydrochloric acid, and it strips the gold out of the plastic cables. When the acid is depleted the workers often dump it in a hole, pour it into streams or open sewers.

Plastics can be cut, washed, dried, and then crushed into a powder and melted into long tubes that can be sold to factories if they are properly sorted by type and color. Workers do not have the proper inspection equipment to distinguish between ABS, PVC, PC, PS, PPO, PP, POM, and MMA plastics, so they use a “burn and sniff” test instead. (Grossman, 2006). PVC coated wires are also often burned to a powdery ash to expose the copper within. The PVC powder is discarded. Burning plastics releases fumes of PVCs and PAHs (polycyclic aromatic hydrocarbons). Condensation and precipitation brings these fumes from the global air stream into local water supplies.

Ink cartridges are taken apart by hand and workers use small brushes to sweep out the ink and toner, inhaling clouds of chemical vapor and carbon black particles.


How is this an environmental problem, and what are the other implications?

The great question instantiates as, "So what? There's some e-waste, how does it affect me?" People are dying. Children are dying. Why? Compromised immune systems and heavy metal poisoning from a rampant and uncontrolled recycling process that puts acid and mercury into the dinner plates of children. Along with this, the soil, air and water content of harmful materials is extremely high in the areas where this electronic waste is imported. The two major resultants of this environmental contamination materializes in health and economic concerns. These two problems also are directly correlated, especially in developing parts of the world. These materials, when disposed of improperly, end up in water supplies, or burned, creating an inevitable consumption that harms those who are unfortunate to live in proximity to these conditions. The black-markets of the areas extract the valuable materials from the dismantled computers and gadgets, and then proceed to burn the materials (occurring in places like India and China with high-populations) which winds up causing disease to many of the innocent inhabitants who do not participate in these kinds of practices. Black-market slave labor is employed to extract these substances and then those workers are the ones who are left to suffer for the inhumanity of those who drive them to utilize E-waste to the detriment of their own health. This is only a recent problem, like stated above, because the development of these specific types of items only dates back to about 40 years, with each year demonstrating the exponentially conducive advancement of technological production. 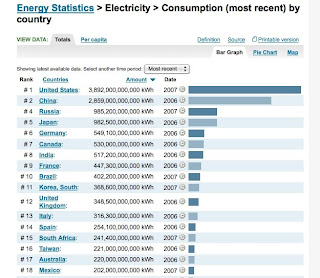 Who needs to take the most responsibility in implementing a change?

The more developed the nation (and subsequently developed nations with higher populations) the more E-Waste they will contribute to the environment. Right now, Americans are buying more computers than people in any other nation, with over 50% of U.S. households owning computers. (BAN, 2002) The chart shown above shows the highest consumption of electricity, thus giving us a general estimate of which nations are responsible for creating the most electronic devices that will soon meet their obsolescence. With the United States leading the pack, it is OUR responsibility to change this horrible trend of polluting not only the environment, but the mouths of children in foreign countries that have to inhale this garbage daily. The responsibility falls primarily on those who contribute largest to the problem, currently the United States, Russia, China, Japan and any economy that relies heavily on technology.

Furthermore, specific type of devices harm the environment more than others. If there are valuable elements unique to the type of machine that is disposed, it encourages this black market activity of melting and removing these elements, thus contaminating the environment further. Typically, the more complicated the device, the more it will pollute the environment, as those items consisting of the most potentially harmful materials will have heavy metals, some of which have a 0% recycling efficiency. The more elements that a high-tech gadget consists of, the more potential there is for harmful health effects, and black-market extraction for those materials, causing economic turmoil in developing nations.

What contributes to the largest amount of electronic waste?

Aside from just pointing fingers at who or what is to blame for this current pollution problem, we can look instead at the human disposition towards desiring progression. Currently, there are alarming rates of obsolescence because of mere efficiency and timing. Rapid product development has made devices like televisions and computers obsolete in only a few years, and with consumers infrequently taking their items to a repair shop to fix them instead of just buying new, the potential for this hazardous garbage is exponential. Currently, more than 50% of disposed computers are in good working order, but discarded just to make way for the latest technology. As of 2005, data suggests that one computer will become obsolete for every new one put on the market, and as technological developments advance, this ratio will decrease even further. More than a decade ago, in 1998, it was estimated that 20 million computers became obsolete in the United States, and the overall E-waste volume was estimated at 5-7 million tons. (BAN, 2002) As of 2009 20 million tons of E-waste is produced per year (820,000 tons of which are copper), (Robinson, 2009) and if we want to reduce this problem we either need to discover a way for reduced obsolescence, or a more efficient recycling method.
Posted by e-waste project at 8:11 AM